What you will need

Setting up the Client Pis

If you power up your Pi 4 now without an SD card in it, it should get stuck on a black debug screen with the Raspberry Pi logo in the top right hand corner. This screen usually displays some useful information which you can use to diagnose what is going wrong incase your Pi won’t boot. But for now, we expect our Pi to get stuck here because we have not connected it to a server that can give it an OS.

Setting up the local network

The Pis, Server and Router have to be connected together via ethernet to form a local network. Use the ethernet cables to connect each of the Pis to the router. If your router does not have enough ethernet ports to accomodate all the Pis, then you will need to buy a network switch to expand the number of ports. If you use a switch, remember that you still need to connect the router to the switch because the router acts as the DHCP server (i.e. it assigns IP addresses to the devices on the network) and without a DHCP server the setup will not work. Finally, the server should also be connected to the network via ethernet.

We provide a wiring diagram below.

Remeber to remove the SD card from all the Pis. At this point, if you try turning on the Pis, they will still get stuck on the boot screen, because they are atempting to network boot but we have not configured the server to provide the OS yet. Lets do that next.

One other important thing to do at this stage is to configure things so that the server has a fixed (static) IP address. This is important later on because the Pis need to know exactly which IP address to go to to get the OS when they boot up. If the IP address of the server changes then the Pis will fail to boot. There are two possible ways to achieve this:

Setting up the Server

As mentioned before, you can use a laptop, desktop or even another Pi as the server. But the server will need a fair amount of storage since it will store the filesystem for all of the networked Pis. So we recomend using a ully fledged PC (laptop/desktop) running Ubuntu 20.04. The server needs to be running linux because we will be using an open-source bit of software called Pi Server.

Pi Server makes it as easy as plug-and-play to network boot Raspberry Pis. Head over to the Pi Server GitHub repo and follow their instructions on how to build and install Pi Server.

Once you have Pi Server installed you can start it by typing sudo piserver into a terminal window. You should see the Pi Server GUI window pop up with a setup wizard. Follow the prompts on screen until you get to the section on adding clients. At this stage you should hopefully start seeing your client Pis apearing on the list (the MAC addresses of the Pis appear in the list). 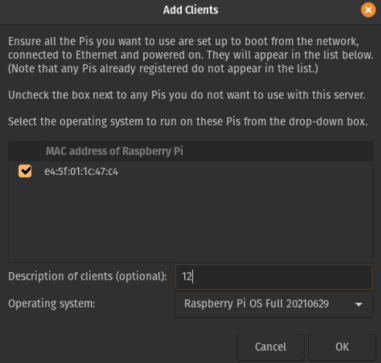 If nothing is apearing in the list then you should:

Once all your Pis apear on the list you can go through the rest of the Pi Server setup wizard. At some stage in the setup you will need to chose an operating system (OS) to use for the Pis. We recomend selecting Raspberry Pi OS Full since it includes a fully fledged desktop environment and usefull applications. It will take some time to download the OS from the internet, so be patient.

Once you get to the end of the setup, the Pi 4s should automatically receive the OS from the server and proceeed to booting up. Hopefully after a minute or two the Pis will boot into a login screen. At this point you should be able to use the login details you created during setup to login to your network booted Pi.

If you are going to use your Pis as a learning center in a school you might like to consider installing Kolibri on the server. Kolibri as an open-source project which provides a digital learning experience for offline computer labs. Head over to the download page and follow the instruction on how to set it up on Ubuntu.

Once you have Kolibri setup on the server, you should be able to reach Kolibri from any of the Pis by typing xxx.xxxx.xxx.xxx:8080 into the search bar of the browser, where xxx.xxx.xxx.xxx is the IP address of the server (which you set earlier in the setup).

You might like to be able to remotely connect to the server from another PC to offer remote support, if neccessary. We found that the easiest way to accomplish this was to setup the server as a host on a virtual private network (VPN). Then if you connect a PC to the same VPN, it is really easy to connect to the server via SSH or a remote desktop protocol such as VNC.

We use the open-source VPN, OpenVPN. OpenVPN also offers a service which allows you to host a VPN on their network with up to three connections for free. This was more then enough for our usecase because we used one connection for the server and another for the PC providing remote support.

Here is a good tutorial on how to setup OpenVPN. Setup OpenVPN for Remote Desktop

We chose to use VNC as our remote desktop protocol instead of RDP, but that is up to you. If you chose to use VNC, we reccomend installing x11vnc on the server. Setup X11VNC